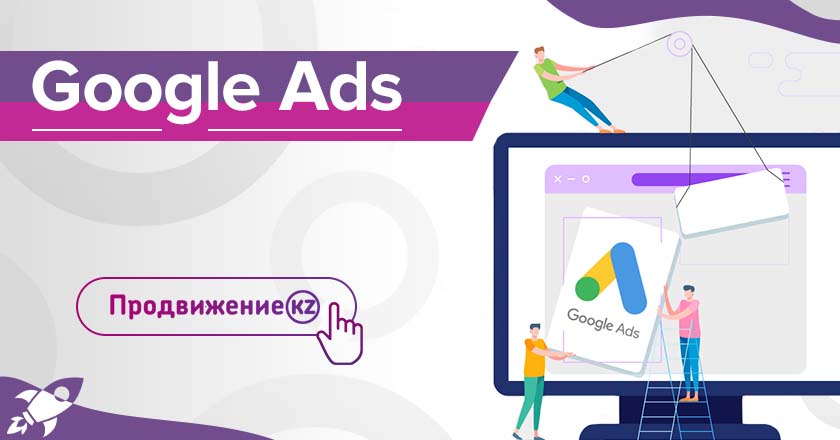 Contextual advertising system Google Ads - the largest in the world, and every day it shows advertisements of millions of different Internet resources. But setting up Google Ads correctly is not at all as easy as it might seem - without a lot of experience in similar work, it is difficult to achieve maximum advertising efficiency. On Google Ads, the prices are high - but every dollar spent will bring much more profit, especially if all the settings for the optimal set of keywords were made correctly. Our company provides such a service as Google Ads contextual advertising with maximum efficiency - we have been marketing on the Internet for many years, and we know perfectly well what is best for our clients in Kazakhstan.

Such contextual advertising on the Internet can bring a lot of benefits to our customers - right up to a confident entry into the international market, and an increase in sales volumes dozens and even hundreds of times. The key to success here will be the highest quality traffic - after all, advertising will already be initially selective. BUT advertise on the internet This type can be very easy, without burdening yourself with the complexity of customizing countless forms - just contact our advertising agency "Promotion.kz".

What is Google Ads?

Google Ads - This is one of the main services that carry out contextual advertising on the network. Over the years, it has proven its high efficiency and has become an indispensable tool for all marketing agencies involved in promoting goods and services on the Internet.
Google Ads statistics:
- Google's revenue from advertising on the Ads service in 2012 exceeded $ 42 billion;
- the popularity of Ads among advertisers is growing extremely rapidly, which is the best proof of its effectiveness - from 2004 to 2012, the number of ads placed on the service increased by 8000 percent;
- Resellers of Ads offers already exist in seventy countries, including Kazakhstan.

Google Ads is the most popular advertising service in Kazakhstan

During the global financial crisis, when all business organizations significantly reduced their advertising costs, it became possible to accurately assess the effectiveness of advertising services. Google Ads has shown itself to be the most resilient.
Google Ads in Kazakhstan in 2008-2012:
- analysts have repeatedly noted that online display advertising (video, audio, flash animation) is steadily losing its popularity, while contextual advertising is growing - by 2012, the share of contextual services amounted to 65 percent of all types of online advertising;
- despite the general collapse in the popularity of contextual advertising during the active phase of the crisis, Ads only strengthened its position in the republic - over a four-year period, its market share increased from 26 to 60 percent;
- Advertising fees Ads in Kazakhstan by the end of the active phase of the crisis (January-February 2012) increased by eight percent - up to four and a half billion tenge (the entire contextual advertising market is slightly less than seven billion tenge).

Placing advertisements in Google Ads is as simple as possible - the customer formulates a specific request, upon entering which the network user will see a link to the advertisement of the product of the same name. Such a system is extremely effective - firstly, it is not aggressive and does not irritate users, and secondly, it initially has a narrow focus and targeted coverage.
Ad design in Google Ads includes:
- determination of the target audience - the country / city / region where the promotion will take place, the language of potential customers, gender and age;
- the wording of the text part of the ad - the title, description of the advertised product or service, URL;
- the choice of keywords, with the help of which the promotion will go - plus the fact that the system itself will prompt the most popular and effective variants of keywords, so mistakes are practically excluded;
- payment for the publication of the announcement.

The cost of an advertising campaign in Google Ads

The huge advantage of advertising using the Google Ads service is that you can run a company by yourself choosing its scale and budget that will be spent. As such, there are no fixed tariffs, the customer decides for himself how aggressive and costly the company will be.
The cost of promoting in Google Ads is determined by:
- the accuracy of targeting the target audience - the already defined the circle of potential customers, the cheaper the company;
- the option when the advertising function is considered completed - it can be a transition to the customer's site or just viewing the ad without going to the site;
- the duration and scale of the advertising campaign - the larger it is, the cheaper in the end.

In addition to its main function - advertising promotion, advertising through Ads is also useful in that it allows you to get detailed statistics on the traffic of the advertised resource. This is very important, because using this feature, you can more efficiently manage your site or page.
Reports provided by Google Ads:
- the average position of the advertised site among similar resources;
- Google Analytics service covers in detail what specific pages on the site are most visited by users;
- the total number of clicks (transitions) on key phrases-links;
- the total number of views without conversions.